writing is a business... 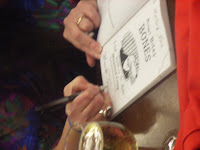 Writing is a business....

It’s amazing how many people don’t know that.

Lately I have heard...

‘but writing is your passion’(tone meaning... it’s not proper work.)

‘Are you rich yet? You were on the best seller list!’

So you explain how the industry works...writers get 10% of the RRP and children’s writers get less than that... and you watch their faces fall and their look of disbelief.

I have been asked so often I now have figured out a stock answer.

I do it because I love to tell stories. With teaching you have a captive audience. They have to listen to the stories you weave around your maths problems...having a book published and in shops means you are legit! I have always said that being a writer is the best job I know because you can ask anybody anything and say it’s for research!

Unfortunately the money is laughable.

In the weekend the New Zealand Society of Authors organised a lunch speaker in conjunction with New Zealand Book Month. The speaker was an Australian agent. New Zealand doesn’t have many agents... but they are standard on other parts of the world. In the UK and the US publishers only deal with agents...(that’s why the pitch slam was so amazing...a chance to pitch directly to an editor.)

The agent, Sophie, looked like she was on a steep learning curve.... In the room only two writers had agents and they were children’s writers. As Don Long (Chair Wellington NZSA) pointed out to her that 48% of the writers here in NZ were Children’s Writers.

Sophie did comment that children’s publishing was a whole different ball game. Children’s writers now were being asked to provide additional content to support websites and ongoing character blog sites.... It’s a brave new world out there and the grown up writers had better watch out....

Sophie also commented that writers have to do their own publicity....I have been hearing this so often...and I believe it now. I wish I had a box of my books... I could hawk them myself....as it is I refer to the children’s book shops.... If you look at some of the children author blogs, you will see giveaways...competitions... guest interviews...(when do they find time to write again?)

Fifi and I were nodding to each other, we understood to the fullest extent what Sophie was talking about.

So thanks Fi for propelling me into the brave new world!(i'm not sure if i was ready but too late now...)

Contact me if you want to buy a book! (or check out your local children’s bookshop.)

Come up with a nice short pithy slogan for the National Conference of Children's Writers and Illustrators.

Great post!. O, for being a writer of yester year when all you were expected to do was write. And publishers were willing to spot the diamond in the rough and polish it mightily till it shone. Now the ms must sparkle like a brilliant cut gem before it even reaches the slush pile and even then it may not catch their eye. And writers must now wear many hats, singing, dancing and selling our wares. I only want to write. I struggle with all the other stuff. Was the australian agent impressed at how we survive despite everything?

Hi Melinda,
The aussie agent was a bit gob smacked I think at the lack of take up of agents. There are only four agents in NZ and two of them are part time. Also it seemed from the general questions that writers in NZ didn't know what an agent did or that NZ agents didn't work the way the aussie agent expected. Agents negotiate contracts and hold auctions...and help with promo etc they also career plan and encourage...something that the publishers of old used to do...
I think the writing is on the wall to NZ agents...the norm for overseas is coming here soon...either they smarten up and become more proactive in their deals and in their business promotion or they will lose out to aussie agents who can see a huge untapped market here in NZ.
Sophie did comment that OZ and NZ publishers should work together more - at the moment OZ only gets NZ authors through the UK... ludicrous when you think about it.
You could see the wheels turning in her brain as she talked to us...
there is no barrier to being an NZ author in OZ..they just claim you as aussie only born in NZ...(carefully not saying you are still living there...)
cheers back
maureen

and...my experience of an agent is that there is very little in the way of hussling. I had thought that an agent would be out there pounding on the doors, being aggressive in a charming yet firm way and promoting you like crazy. It seems the reverse and it seems that there is room for a young spirited agent willing to shake it up a bit in the NZ industry. Kathryn Carmody- where are you and when are you going to take up the challenge!
signing off as an Fairy Anonymous...

The other possibility is to get an overseas agent - and I know this is a possibility, because this weekend I'll be posting an interview on my blog with a NZ writer whose YA novel has been published this week in the USA, after she approached, and was taken on by, a US agent. So it can be done!

The interview I mentioned in my previous comment is now up on my blog - it's with Helen Lowe, whose YA fantasy novel Thornspell has just been published in the USA: