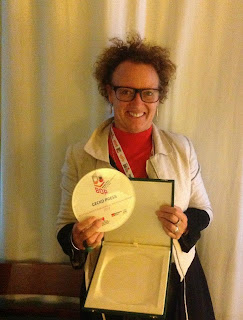 Say Bologna to anyone interested in children’s writing and the response back is a dreamy far away look that goes with the heart felt phrase “wouldn’t it be heaven to be there.”
I was seriously jealous reading my twitter stream this week as agents were heading to the Bologna Children’s Book Fair and talking all about it.

New Zealand has always been known as a country that ‘punches above its weight’ in the global political scene.  We were in on forming the League of Nations and the UN and for any Americans that believe Argo is fact...um actually NZ was hiding Americans but we don’t talk about it....
Yesterday at Bologna to celebrate 50 years of the fair...everyone voted on the Best Children’s Publisher In The World by region. Six regions. Six winners. Our little Gecko Press from Wellington won their region. To stand acknowledged by your peers at the biggest children’s book fair in the world as one of the best publishers in the world...after only eight years of existence...is mind boggling.

So what else is happening at Bologna?
This year in the Tools of Change conference, that starts the day before the fair at Bologna, Bowker had an extraordinary presentation. Porter Anderson discusses the data from the slideshow which Bowker have made available and it does turn perceptions about children’s publishing upside down... for instance the biggest buyers of YA are...adults for themselves! If you are involved in children’s publishing take some time to go through the slides...food for thought all over them.

Joe Wikert, also at Bologna, is looking at the rise of children’s e-publishing. He profiles the winners in the interactive e-book awards. There is a video that is a must watch so that you can see why these books won! Great to see Michael Morpurgo’s book in there...and what a fascinating non fiction winner that is!

Outside of Bologna....
Barnes and Noble pull of Simon and Schuster books over their refusal to pay the new prices to have their books displayed is the hot topic of the week. Guess who are the people hurt in this one....

Novel Rocket is getting the comments after posting an article saying you should only write in one genre...

Courtney Milan looks at the New US Supreme Court ruling about First Sale Rights and the death of geographic rights...and checks out what it will mean for fiction writers...This is for all those writers who have ever wondered why their book is priced differently in different countries and whether they can order cheap copies from one country and onsell them...

Project Middle Grade did a survey about what kids actually looked at when sizing up a new book...Writers...You may have to change your focus!

What are Asians really interested in reading? Topical with everyone wondering how to get into the Asian market.

Diymfa on online writing communities...where do you get your support?

The Telegraph has published 30 things writers should know...a guest article from Matt Haig.

In Craft,
Book Editing: Top Ten Tips
Writing Fantasy Settings
The funniest query to an agent...tip don’t do any of these.

To Finish,
Dean Wesley Smith’s article on sales from his Think Like A Publisher series is getting a workout on Twitter. If you haven’t read it check it out...coz from little things grow Bologna opportunities....

pic: The Magnificent Julia Marshall of Gecko Press at Bologna.