The Danger of Words 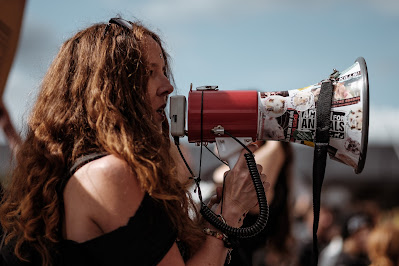 In Publishing News This Week

The news that Salman Rushdie was stabbed at a literary event shocked the world. The death threats against him had faded from the public mind. Rushdie spent ten years in hiding and when the death threats weren’t actively being promoted it seemed that he was being left alone. Not So. His plight highlighted author safety, the problems authors face when they speak out, or up, or hold dissenting views. The right to Free Speech is held up everywhere as a feature of a functioning democracy. You have the right not to agree with their views, but you can’t deny them a voice. This week The UK Society of Authors chair Joanne Harris has been accused of not sticking up for authors who hold dissenting views, which she denies. The argument is being reported in the media and there is an open letter in support of Joanne from authors in the UK. While all this is playing out the recent survey on writers’ safety is warning that threats against writers are on the rise.

Frankfurt Book fair looks like it is back to the old numbers of pre covid days. 4000 exhibitors have registered to display their books and I note that Spotify and TikTok are among them. Publishing was changing fast before the Pandemic, but I don’t think anyone predicted that either of these two influencers would be at Frankfurt Publishing Fair.

Cory Doctorow has a new book out that shines a spotlight on punitive contracts in the creative economy. Chokepoint Capitalism- How Big Tech and Big Content Captured Creative Labor Markets and How We’ll Win Them Back. Cory has many popular writers supporting this book and because he names Audible as one of the worst for contract terms, he is having a Kickstarter to get the book recorded outside of that ecosystem.

Writer Beware shines a spotlight on the scammers who prey on authors. If you suspect an offer is too good to be true check the website to see if your fears are realized. The latest scam to come across their desk is offers from agents whose identity has been impersonated. If the offer comes from an agent out of the blue…check into it. Your email query for legitimacy might be a heads up to an agent whose name and reputation have been targeted by scammers.

The dreaded writing critique workshop has scarred many a participant. For many prestigious creative writing courses, the Iowa method or the Milward method is the way to conduct a critique workshop. Tor’s guest editor S L Huang found out that this method was pioneered by a deeply flawed poet deeply immersed in the cold war rhetoric. There are other ways to critique creative writing and ripping the author to shreds as some sort of rite of passage is based on warped thinking. If you are interested in workshopping read the article and send it on to your writing tutors.

Kris Rusch brings a dose of common sense to the writer who believes other writers are competition in her latest post in her series on how writers fail.

Sandy Vaile brings hope in her excellent post on how to have an enduring career.

Two interesting posts caught my eye this week. A Youtube channel that compiles writing music for authors and an interesting post on toxic productivity that afflicts writers.

Joanna Penn interviewed Becca Puglisi on the new Conflict Thesaurus that Angela and Becca have just released. This is volume two. Becca has some great ideas for levels of conflict in your writing. It doesn’t have to be a huge conflict but it does have to be there.

Two great posts from Angela Ackerman. Does conflict belong on every page and How to build a flesh and blood character- Bookmark Both

The What When and How of character backstory -Cheryl Burman

How to do a scene by scene breakdown- Scott Myers

In the Marketing Section,

How to get book reviews with special promotions- Penny Sansevieri- Bookmark

How to make your book newsworthy- Reedsy

Last month everybody was talking about the rise in AI picture creation. There was speculation about whether AI scraping pictures was breaching copyright. Derek Murphy decided to look into an AI Picture generation site as inspiration for his characters. The results are stunning. Derek discusses the moral ambiguity of using AI images. As a cover designer himself, he sees it as another tool but not a replacement. AI hasn’t taken over yet.

Do you want the best of my bookmarked links in a handy monthly newsletter? When you subscribe you will also get a nifty mini book crammed with marketing notes as a thank you.

If you like the blog and want to shout me a coffee, hit the coffee button up top or here. I appreciate the virtual coffee love. Thanks.

Posted by Maureen Crisp at 9:53 PM