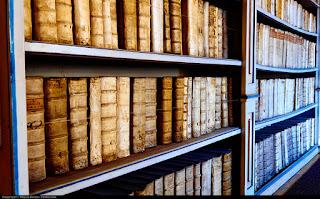 Kris Rusch has another stand out post on Contract Dealbreakers... This week it’s Rights Reversion. This is an important post to read especially if you are looking at a contract where the publisher wants all rights... or no dice. (this is common in NZ.)

A few weeks ago I had a link to a post by Steven Spohn on Chucks Blog, on the nature of writing disabled characters. This week, Disability in Kids Lit, posted an article of terms to be familiar with if you are writing a disabled character.

This week Mike Shatzkin announced that he will no longer be programming the Digital Book World Conference as he thinks the big strategic questions facing the book industry have been answered. Mike shares an overview of the last decade. And what a decade it has been.

Writer Unboxed has an excellent article on dealing with Writers Block... In a choose your own adventure style.

Hugh Howey writes an excellent story. This week on his blog he talks about breaking ideas. Not just breaking but shattering them to find an unforgettable idea... and writing from there.
It just might be a new classic.

Getting the story out of your head- Jennie Nash

In the Marketing Section,
10 tips for how to get Book Reviewers- Anne R Allen Bookmark

Before you self publish read this- Joanna Penn – Bookmark

To Finish,
Today there was a spirited opinion piece in the Guardian taking issue with the tired old list of books being foisted on children as classics. The list came from the BBC’s Love to read campaign and was contributed to by the public. But modern children’s literature was missing. We know it's being bought so why doesn’t it make these classic lists?

A Monster Calls by Patrick Ness is being made into a film. This book has won numerous awards and is the only book to win both The Carnegie (Patrick Ness for writing) and the Greenaway Medal (Jim Kay for illustration) It is absolutely a modern classic. Do we have to wait for a film to be made to validate this? (Trailer out today.)