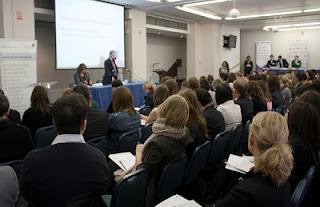 Conferences have been in my mind lately, specifically Book Expo America (BEA) and Golden Yarns (GY) here in New Zealand.
BEA brings people from all over the publishing spectrum together for a packed 3 day conference. This is where new research is shared, trends predicted and deals are made. It isn’t much about the writers of the content but more about how the content is managed, packaged, delivered and distributed to the global marketplace.

Golden Yarns was the latest conference for the Children’s Literature community in New Zealand. This community has now had 3 stellar conferences two years apart. The Golden Yarns conference focussed on best practice writing and illustration workshops with keynotes being delivered by leaders in the NZ Children’s Literature field on their personal heroes. There were many opportunities for the group to share ideas, hash out issues and drink wine. (The wine bill paid for by a NZ Children’s Writing Icon...gob smacking and a lovely gesture as she wasn’t there to drink it.)

Two very different conferences in focus but both valuable to the writing and illustration practitioner.

Breaking down B.E.A.
Bob Mayer gives an entertaining overview of what was going down in old New York Town. His main concern the lack of digital focus by the organisers (who seemed to believe the talk from publishers that ebooks sales have plateaued....) A report to show this was released at BEA.

Sam Missingham examined that report on ebook sales facts and figures, and blew that idea out of the water. Sam $40% BEA 0

Publishing Perspectives took a punt at what they think will be future trends in publishing....hmmm more amalgamations?

Shelf Awareness took a look at a BEA first, Power Readers, who were invited to participate at BEA. Who are they and Why do they matter... they also checked out Neil Gaimen’s talk on why fiction is dangerous.

Inspiring and Challenging
Here in New Zealand everyone who attended GY is coming down off their high. Melinda Szymanik has written an overview of the first part of the weekend.

Over in the UK the Children’s Laureate, Julia Donaldson stepped down after her two year stint with a great broadside at the lack of reviews for children’s books. The wonderful Malorie Blackman takes over....
This sparked a debate in NZ within the KidLit community for our own Children’s Laureate...after all we have a Poet Laureate. If you would like to add your voice to this and are on Facebook, check out this page.

Chuck Wendig has written another 25 things post.... this time on YA Lit. Be entertained...BeWare...it’s Chuck.

In Craft,
Jami Gold on Can ThisStory Be Saved...how to figure out what’s wrong. and What Soap Opera’s CanTeach You...

Chuck Wendig on Ten Stupid Writer Tricks That Might Actually Work (they do!)

4 best strategies for savvy self publishers

7 tips for choosing your book cover

PR and Marketing for Self Publishing Do’s and Don’ts

The Book Designer has a great blog and his guest blogger Joan Stewart has a take note article on Business Opportunities That Even Savvy Writers Are Missing Out On.

To Finish,
A good conference should allow time to network with your peers, should inspire you, educate you and give you tools to move forward in the ever changing world of publishing.
Suw Charman Anderson has written a Forbes article on what she thinks needs to happen next. Why Publishers Should Invest In Authors Not In Books.... could this be the model for the future?

Below the animation announcing Malorie Blackmans appointment...and no that rap was not written for the announcement it’s been out for a few years now.
(Such street cred with her readers!)
pic from Flickr/ http://www.flickr.com/photos/ncvophotos
Posted by Maureen at 8:37 PM