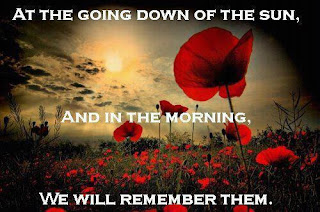 ANZAC day* is always emotional. Whether you are braving the chilly dawn for the memorial service or later in the day at a full civic ceremony...there is always the tear in the eye, the tight feeling in your throat. On this day I think of all the members of my family who served in their different wars and are still serving. The one who didn’t come back in 1916, age 23 with no known grave...his brother, my grandfather who did. My husband’s grandfather, one of less than 200 that survived Gallipoli and the Western Front. ANZAC day is always harder when one of our family is overseas serving as a Peacekeeper.
When we were overseas last year, we met a Turk on a train in Italy. It was a special moment as we both talked about the war that forged our two nations. Each of us had a story to tell about visiting Gallipoli and crying. He talked about seeing a fused piece of metal, the result of 25 bullets that all hit together at once.
What a hell it must have been!

In the blogosphere this week a different kind of war was happening as reaction to Barry Eisler’s keynote address to the Pikes Peak writer’s conference was furiously debated on Twitter. Agents and Publishers taking exception to Barry’s comments that Legacy publishing was a lottery and their only value was for print distribution deals. Once the hot comments were out of the way and agents and publishers climbed down off the ceiling...debate was more constructive. Read the comments people...but give yourself some time...

In the last year very successful indie e-publishers have begun partnering with big publishers for print only deals and agents are becoming publishers on the side, organising editing, covers and marketing of eBooks or POD...it is pretty easy to see Barry Eisler’s point.

The London Book Fair has just wrapped up and there was lively debate around the changing nature of agents. So do you want a manager, a partner, a business coach...or a deal maker? And No an Agent is not necessarily going to do all of that.

Joanna Penn was also thrilled to be at the Fair. She has a huge blog post filled with video interviews and comments about the 2013 Fair, which had the most writers attend ever. Take some time over this one.

Joel Friedlander talks about his war on Word...how Word won...and what he is doing about it. Check it out and get a great deal on his solution!

Seven Steps To The Perfect Story is one of those amazing graphics that you really want to print out, stick on your wall and gaze at for a long time.

Myths about Query letters to Agents...don’t get too worried.

Elizabeth Spann Craig has been looking at Audio books and ACX. This is a feel good post telling you how to use ACX.

To Finish,
Roz Morris talks about Obituaries and why they are so important for writers...

*ANZAC Australian and New Zealand Army Corps remember their fallen soldiers on 25th April the date of the landing of the Corps at Gallipoli in Turkey 1915. New Zealand lost ¼ of their men and more than ½ were severely wounded. The Turks lost twice as many allied casualties and their leader Ataturk Kemal became the Father of Modern Turkey. After a disastrous nine months the Allies left the peninsular in the dead of night leaving behind more than 44000 dead to lie with 87000 dead Turks. New Zealand suffered the largest casualties relative to their population of any Allied Nation and the campaign changed forever both Turkey, who won, and Australia and New Zealand, who lost but found and forged their own national identities away from Britain.

I saw Dire Straits perform this live when I was 21...it never fails to remind me of the loss and weariness of war and the need for Peace.
Posted by Maureen at 9:06 PM