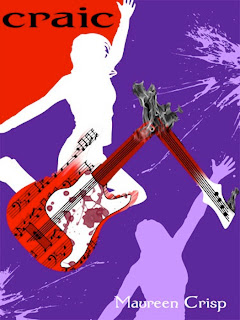 Great, interesting post, Maureen. It's a fascinating process, looking into cover design, what works and what doesn't work and how to stand out in the marketplace.

Congrats on releasing Craic. I'm looking forward to reading it. :)

Hi Sarah,
I can see why you design covers for other people...Very cool...and I wasn't kidding about the time sucks...just browsing fonts i lost a couple of hours...and that was nothing compared to photo and image browsing...Add in music which i did for the book trailer and I did no work for a week..:)

Yay well done!! What an exciting project and a fabulous looking outcome. (Love the purple.) It's great to see you putting all your hard-won research into operation, and thanks for being so generous in sharing your findings.

Hi Pippa,
I've had an interesting time over the last couple of months and it is continuing.....hehehehe