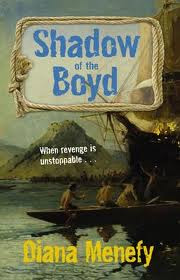 The holidays are fast disappearing and my To Do list stays the same. This week has had some highs tho.
My family managed to all go to the movies together. It may not sound like a big deal to you but it is to me. With so many things pulling at each one of us, we can only usually manage to eat together once a week. Family events of more than the fifteen minutes to eat dinner take major planning.  We saw The Sorcerer’s Apprentice...and we all enjoyed it for various reasons...How they managed to cleverly mix physics and magic, the mop scene from the old Disney version, Nicolas Cage, and the Harry Potter trailer....
Straight after the movie I raced into The Children’s Bookshop for Diana Menefy’s little soiree to celebrate her book, The Shadow of the Boyd. This ripping yarn’s journey to publication has been long in the making. Diana has been researching this piece of tragic New Zealand History for about a decade. She has cleverly woven in many facts about shipboard life in the early 1800’s but not at the expense of a great story of tragedy and survival against the odds. When I got home after dinner out with some great writers...I started the book and kept going...finishing it in one bite. Shadow of the Boyd is the last book picked up by a publisher from the pitch session at Spinning Gold to be published and I was delighted to be able to celebrate this with Diana and some of the Spinning Gold team.
I haven’t been doing much researching on the net this week so this morning I took a look at what has caught peoples attention that might be of interest to you.
Lynn Price, Editorial Director Of Behler Publications has ripped into Christopher Pike for not only NOT researching properly but for then trying to defend the resulting mess. She does not spare the editors of his publishing house either who did such a sloppy job that they didn’t catch obvious errors which ruin the whole foundation of the story....You may think she is a bit harsh...but I don’t. Diana Menefy spent ten years getting the history right, the life and times, the names of the characters and the language right for Shadow of The Boyd. It is children’s novel but it has been meticulously done. I know how much time I spend researching...writer friends have called me on it...(stop and just write the damn book...) We have a duty to our readers after all to write a good story. Our readers are not dumb and treating them as such shows an amazing arrogance which will fast lose you credibility and readers.
While I am ranting (but not half as well as Lynn Price) Suzannah of Write It Sideways has a minor rant on her blog about being plagiarized. Suzannah has discovered that whole articles have been copied and pasted, cut up and attributed to other bloggers. She is trying to get a perspective on it that doesn’t involve wasted energy...and negative thoughts. Suzannah has posted a short list of rules for new bloggers to understand about linking to others work, and commenter’s have linked to some great sites for copyright protection.
Off on a different tack Victoria Moxon has another very fine article on How To Make Your Novel Hopelessly Addictive and Nicola Morgan has one on Dialogue Techniques. Both of these bloggers are a valuable resource if you are looking for writing help.
Chip MacGregor has posted an exhaustive list of things a good agent needs to know. As Chip is the owner of a successful literary agency he is well qualified to speak. As always I urge you read the comments of the articles I link to because they often have some great extras to add to the discussion.
Over on Craicerplus my Amplify page I have links to articles on
7 Factors For Success In Finding An Agent
Earth Like Planet Can Sustain Life (geeking no apologies)
9 Ways To Prepare For NaNoWriMo
A Writers Guide To A Successful Interview (how to use an interview to get your message across)
Writing Series-Thoughts and Resources (this is great if you find your story going on longer than one book)
Kindle Self Publishing (writers can now self publish on Kindles....)
On a slightly different facet of the writing life...Alexis Grant has a good article on Writer’s Colonies. These are amazing residential places that writers can go and just write. Someone else takes care of all the other details...food, laundry etc etc. Some colonies will pay you to go there...It is to dream...
Guy Le Charles Gonzales has been doing a bit of that lately and has re mixed his ideas on 21st Century Publishing. Traditional print plus fan sites plus book cafe sites plus on demand printing equals a very interesting publishing model for writers.
For those of you interested in the 1000 fans idea, my friend Justin sent me a link to a photographer who is experimenting with the concept and has chronicled his two year journey...(yes he is making money...and he doesn’t have 1000 fans...)


Pic is the cover of The Shadow of The Boyd and below a little clip (you can find anything on YouTube)
Posted by Maureen at 5:35 PM

agree with the comment about research - it's painful but I need to be able to 'see clearly' the place I'm writing about.

Tania, you are so right!
Fleur tells me she finds the research painful as well...I am just the opposite....I love researching...it is the writing I find challenging...lol
I have been living on and off Mars now for about two years...as the science changes I can go in any direction with my story...probably why Fleur is metaphorically kicking my butt to get my nose out of the research and back into the story!!!
But I know that it is important...to get it right!
Like you I have to 'see'

Thanks for the mention... The track-back led me to your site!

Hi Alexis, you always have interesting stuff on your blog!

Hey, thanks for mentioning my article on plagiarism! I appreciate it :)