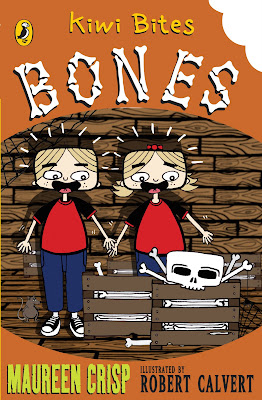 Despite the back cover blurb, I feel Bones is less a mystery story than a small and delightful study in both human and canine psychology, as well as a fascinating lesson in police procedure.

What would happen if your dog began bringing home suspiciously human-looking bits of skeleton? Bones answers this - allowing the reader to look in on a realistic police operation as well as the reactions of the individuals at the centre and on the periphery of the investigations. (I like the cameo from two elderly rubberneckers: ’Police are so young these days,’ said Carol to Mavis... ‘Almost babies.’)

By the end of the book, the mystery of where the bones came from is solved, but not the mystery of how they got there. The book hints at a possible sequel. Perhaps we will find out then?

I received a copy of this review from Penguin recently. I would love to know who the reviewer was.

I remember when I was writing Bones, the list of people I made sure I interviewed to get the facts right. And the extra gruesome things I found out from the police and the pathologist that didn’t make it into the book. I am so pleased this reviewer picked up on this.

I think if we write for children we have a duty to make sure that we do get it right. I know that growing up in a medical family, if something was glaringly wrong in hospital procedure on TV, my mother would continually rubbish the programme so in the end no one could watch it.

And she was unrepentant...’It should be accurate.’

My Mother-in- law is the same, she write Romance novels. Her big issue is that the occupations of her main characters must be believable and accurate. You won’t find her writing about inherited millionaires and sheiks. So in her library (and she does have one...dewey-ed, of course,) you will find all sorts of textbooks and journals about the most amazing jobs out there. If you want to hunt for sunken treasure there is an international journal just for you...That was a good subscription she told me...Lots of exotic jobs in that industry...Plenty of romance there. Of course she interviews people too...to make sure her plots are believable.

It is the attention to detail -the believable worlds you create- that stay with the reader and give them a much richer reading experience. For five years our eldest child would discuss over dinner the implications of magic and plot from the Harry Potter series....and now our middle child, the one that never stays still, has begun to devour the books...guess what the dinner conversation is...?

So a sequel, huh?

I would have to get the Mars novel done, (I hate leaving unfinished work. (unless it’s housework and that nags at me,) and a few other plotted stories...and there’s this little conference I’m convening. Oh drat...finding the time...